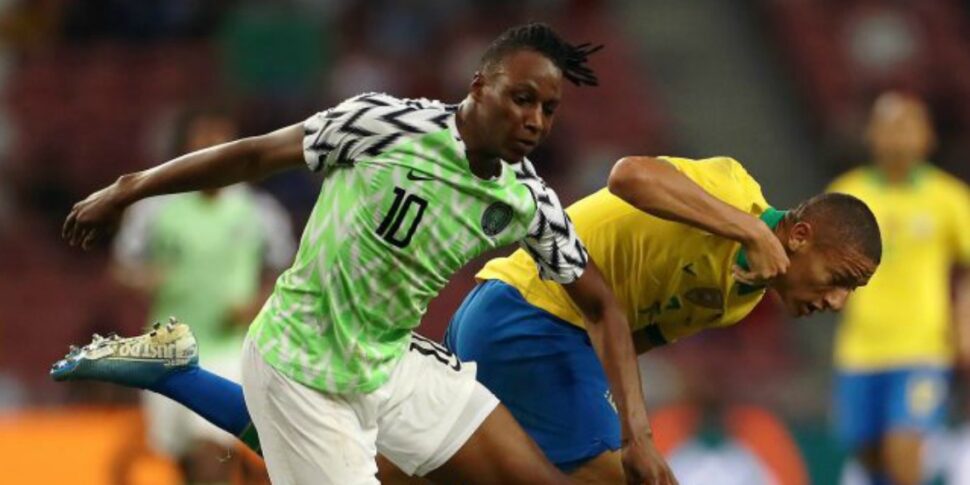 The great feeling that comes when a player lays a mark after notching debut goal(s) is incomparable; in most cases, it sets the bar high for what’s to follow, and it also creates a personal memory for the player to cherish all through his life.

The dream of every football player is to announce his/her arrival into the team with scoring remarkable debut goal(s). And sometimes, these dreams come true in the most unbelievable ways.

For the Super Eagles, a host of players would definitely have had this dream of scoring on their debuts, but it’s one thing to dream; it’s another to make the dream come true.

Cheapgoals will in this piece, bring you the Super Eagles player who bagged a goal or two on their debuts even though it doesn’t guarantee a successful international career.

Considered to be one of Nigeria’s greatest wingers, Finidi at 22 made his debut for Nigeria in 1991, during an Africa Cup of Nations qualifier against Burkina Faso.

Finidi came off the bench for an injured Austine Eguavoen to score and also provided three assists for Rashidi Yekini and also scoring once in the 7–1 rout – the game was staged at the National Stadium, Surulere Lagos.

The backflip specialist having performed fantastically at the 1999 FIFA U20 World Cup, earned a place as a teenager in the Super Eagles squad to the 2000 Africa Cup of Nations co-hosted by Nigeria and Ghana.

But due to the presence of some big boys in the Bonfere Jo’s squad, Aghahowa couldn’t feature in the first two opening matches for Nigeria. He however got his chance in the last group game against Morocco after replacing Benedict Akwuegbu.

An 81st-minute goal from Aghahowa gave Nigeria a convincing 2-0 win over Morocco. In total, Aghahowa netted 14 goals in his 32 outings for the Nigerian National team.

Agali is one of many Nigerian players that played for more than 10 clubs outside Nigeria – 12 precisely.

He earned his national team call-up for the Africa Cup of Nations qualifying clash with Zambia following his exploit at the 2000 Sydney Olympic Games, a competition in which the lanky forward netted three times.

He justified his maiden call-up by scoring with his second attempt on goal as Jo Bonfrere’s team labored to a 1-0 win in the hard-fought encounter. Also, between 2000-2004, he was able to make 12 appearances for Nigeria and scored 5 goals.

A fine outing at the 2001 FIFA U17 World Cup handed Opabunmi a spot in Nigeria’s provisional squad prior to the 2002 World Cup under Chief Adegboye Onigbinde.

In his first outing for the Super Eagles against Kenya albeit a friendly match, the forward had a convincing performance, netting on his international debut – a feat which booked him a place in the final 23-man team to South Korea and Japan.

At the FIFA World Cup in 2002, Femi became the third-youngest player to feature at the World Cup, at the age of 17 years and three months.

That day was a propitious day for “Obagoal” and Nigeria at large. Martins was an exciting teenager by the time he made his debut for the Super Eagles.

The match was against Ireland and it coincided with Nigeria’s Democracy Day celebrations. He demonstrated that he was more than ready to take the baton from the set of attackers Nigeria paraded back then when he notched his first of 18 international goals, a tally that puts him fifth in Nigeria’s all-time scoring charts.

READ ALSO: Nigerian Players Who Made It To The Super Eagles Directly From The NPFL

Makinwa made his debut for the National team in 2004. The striker started for Christian Chukwu’s side that lost to Bafana Bafana at the 2004 Nelson Mandela Challenge in Johannesburg.

Ekigho is clearly not a popular name today in Nigerian football, but he had a Super Eagles debut that he’d probably forever relish. He made his debut in the match which marked Samson Siasia’s managerial bow with the national team.

The former Warri Wolves striker was called in as an emergency replacement for Victor Anichebe in a friendly game between Nigeria and Sierra Leone in 2011.

And while the game was on, Ehiosun was brought on to replace the injured Emmanuel Emenike. He doubled the Eagles’ lead with a well-struck shot, seven minutes after coming on.

Bryan Idowu is a Russian-Nigerian who was one of the players invited to the Super Eagles by Gernot Rohr. In 2017, he made his debut against in a friendly against Argentina before the 2018 FIFA World Cup.

Nigeria ran riot over the Albiceleste by scoring 4 goals to Argentine’s 2 – Bryan, (the only defender on this list) scored the third goal in the encounter.

His performance in the game was instrumental as he was named in Nigeria’s 23-man squad to the 2018 World Cup.

Another Gernot Rohr intake to the National team. The Rangers midfielder also had a remarkable debut for the Super Eagles, he found the back of the net in a 2-2 draw against Ukraine.

After his brilliant debut, Aribo again netted against the Samba Boys of Brazil in another friendly a month later.