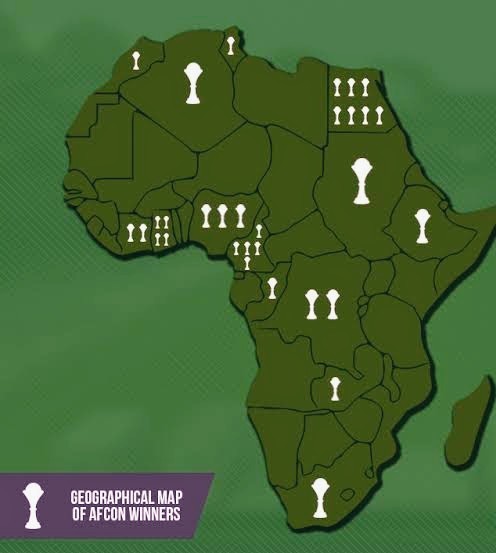 Once again, Africa goes on it’s biggest football show piece, the Africa Cup of Nations, the 32nd edition in the competition’s history after the first ever showpiece in 1957, 62 years ago.

Since then the competition has undergone varying degrees of changes and of course different countries across the continent have since won it, some multiple times, others once while many still await their first win.

With as much as three countries making their debut appearances at the 2019 edition of the competition in Egypt and as well as 24 teams taking part for the first time in the bi-annual competition, Africa may see a New Champion arise by July 19. First let’s look at the past winners.

The pharaohs are synonymous with one thing, the African Cup of Nations, and although they may have only appeared at the World Cup just on two occasions, the North Africans have won a record 7 titles including a treble from 2006 to 2010, the last time they won it.

Of the seven times when they won it, three have come when they hosted the competition, a stat which pits them as favorites especially considering the fact they ended the last edition as runners up to Cameroon.

The Indomitable Lions as they are fondly called are the second most successful side in Africa winning the Championship five times, pulling one clear of Ghana who have four.

The latest of their triumph came in 2017, 17 years after winning it last at the Ghana/Nigeria edition. Unlike Egypt, the Cameroonians have the record of becoming the first of only three African sides who have made the last eight of the world cup.

Even though they failed to qualify for the last World Cup in Russia, the defending Champions of the competition are still one of the favorites to lift it once again.

Black Stars of Ghana are the third most successful team in the competition having won it four times in their history. The first was in 1963 before adding another two years later.

It was not until 13 years after before they tasted Afcon glory again, adding the last one they won 4years later in 1982. However, there have been cases of near misses for the west Africans finishing second five times, the latest being in 2015.

The Super Eagles of Nigeria only lifted the third title six years ago which was the last time they featured at the tournament. Before then, the eagles won the Afcon in 1980 and 1994.

However, they hold the record for most semi final appearances and third place finish. Coached by German tactician, Gernort Rhor, the Super Eagles have only lost twice to African opposition in 19 appearances. With such numbers it would be difficult to write off the Nigerians.

Ivory coast’s first of their two triunphs came in 1992 before their golden generation which had Gervhino, Solomon Kalou and Yaya You’re went on to win the second elusive title in 2015 at the expense of Ghana.

The Elephants came close to winning twice as well first finishing second to Egypt in 2006 and losing shockingly to Zambia in 2012.

DR Congo won it’s two titles, first in 1968 as Congo Kinshasa and the second in 1974 as Zaire. They have never finished as runners-up