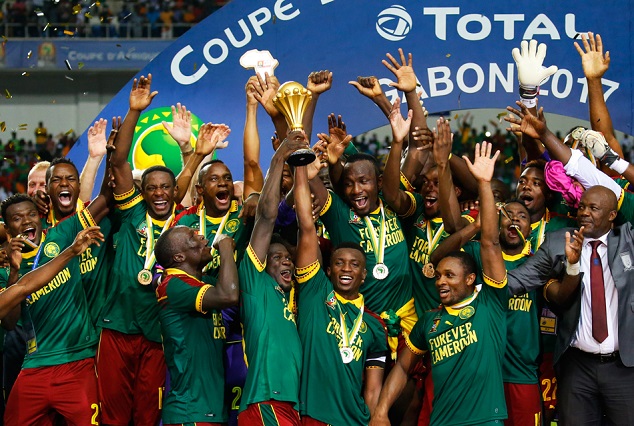 Cameroon heads into the African Cup of nations being the underdogs they weren’t given a hope in hell, the squad were considered to be weakest indomitable lions to ever feature in AFCON overcame all odds.

Arsenal midfielder Mohammed Elneny put Egypt upfront in the 22nd minutes but a stirring second-half performance saw substitutes Nicolas Nkoulou strike put Cameroon back to level before another substitutes Aboubakar fired home another with a sublime finish in the 88th minutes.

In a rather frenetic game, Cameroon shook the big title contenders all through from the group stage to knock-out phase thrashing Senegal in the quarterfinals and Ghana in the semifinals.

READ: Zimbabwean Legislators Want A Refund From The Football Team For Failing At AFCON

Hugo Broos having entered the competition with few expectations, but the strong beliefs and an excellent display of teamwork help the coach seal critics mouths and prove worthy victors in what seems to be their first win since 2002, the players praised the coach influence on encouraging the team.

“I think he has brought a bit more discipline because before, I won’t say there was no discipline, but it is something he has really focused on. In football, if you have to discipline everything else follows,” Edgar Salli saif to AFP.

“The coach has given us something extra, given the youngster’s confidence to show what we can do,” Fai Collins added. “He talks about showing determination, about sticking together as a group because there were problems before but I think he has tried to overcome them.”

Meanwhile, the coach also gives praise to the solid unitedness’ the team put on.

“Maybe you will be surprised but in 29 years as a coach, I have never had a group like this. They are 23 friends. I have never seen this,” said the Hugo Broos.

“They are just 23 friends who like to play football and do everything to win the game so for me, it’s very easy.”

On the other hand, Egypt entered the final with a formidable record only conceding just a goal on their journey to the final, 44-year old Essam EL-Hadary who seems to be the most experienced player for the side started his football career even before Cameroon’s 21-year-old Fabrice Ondoa was born.

Egypt had won seven titles never lost in a final of the prestigious African Cup tournament since 1962, while the Indomitable lions had only four tiles two behind the Pharaohs having lost to Egypt the last time both met.

But really, statistics and experience do little and it was Cameroon’s teamwork and persistent overwhelm the Pharaoh’s steepness.

As the game roll to an end, Cameroonians back at home will be thrilled, joyous seeing their darling national team lifting the AFCON Cup once again since 2002,Cameroon are to host the next edition of the tournament and if the Indomitable lions can continue with their teamwork and persistence they might reclaim the title if not corrupt by ego before then.

On the funny side, I hope top brand ‘Hugo Boss’ show love and give Hugo Broos a nice deal for being part of Cameroon’s historical feat.