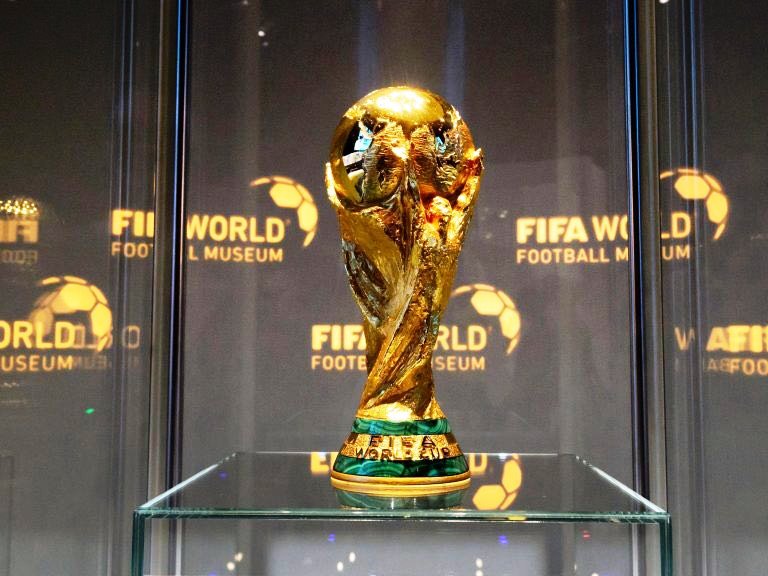 The FIFA World Cup™ Trophy touched down in Nigeria on Wednesday, March 7, 2018, for a four-day experience in the centre city of Abuja and Lagos, and will proceed with its voyage through 91 cities in 51 nations across over six countries before Russia 2018 opening ceremony.

Amid its stay in Nigeria, the famous prize of world football went by the Presidential Villa on Wednesday, where President Muhammadu Buhari had a feel of it and deliver an appreciative address.

The gleaming gold trophy couldn’t have come at a better time as this week denoted a hundred days count down to the beginning of the Russia 2018 on June 14.

While the trophy will be seen by a large number of Nigerians amid this visit, it is an open door for some, fans to behold at close range the diadem that causes all football frenzy and fever every four years.

The most celebrated trophy on the planet is one that drives the ambition of every football player over the globe to do their absolute best for their country to have the opportunity to lift that prestigious trophy made of gold. The FIFA World Cup™ Trophy is the culmination of success, the reward for diligent work and team effort and is only achievable every four years.

For every country participating in the World Cup, it seems as though they’re rubbing shoulders with World prominent leaders and those that don’t as news about the Mundial become the dominant event for that period. Football news takes a jump from the back pages into the front pages and into meeting rooms and public corridors.

There have been two trophies given to the World Cup Final winners since the competition began in 1930, the Jules Rimet Cup which was first called Coupe Du Monde or just the ordinary old World Cup but was renamed in 1946 out of appreciation for the FIFA President who truly started the entire competition and without him doing that we wouldn’t have the most celebrated sporting event.

The gleaming beautiful gold looking trophy was in the shape of an octagonal glass that had a winged figurine which was supposed to be the Greek Goddess of Victory, Nike (naɪki). It was an outline design by a man called Abel Lafleur and was created out of sterling silver and afterwards finished with gold plating on a blue Lapis Lazuli.

The Jules Rimet Cup, initially named Victory, was awarded to FIFA World Cup™ winner until 1970 when the third FIFA President, Jules Rimet, passed the vote to start a worldwide football competition in 1929. After a year, he awarded the Cup to Uruguay team, the first World Cup winner ever. The Cup was renamed out of appreciation for Jules Rimet after the Second World War.

After handing over of the Jules Rimet Cup to Brazil, FIFA needed to commission a swap trophy for the 1974 FIFA World Cup™. Fifty-three entries were received for the trophy design, declared in 1971, stone carvers from over seven countries made the list, Italy’s sculpting prowess precedes Silvio Gazzaniga when he won the commission, made two submissions. The earliest one was acknowledged.

“To create a universal symbol, I was inspired by two fundamental images: those of a triumphant athlete and of the world,”

“I wanted to reflect the elation of the winning footballer – a man transformed by the enormity of his victory – but without the super human ego.

This sporting hero who embraces the world in his arms, reflects the strength needed to make sacrifices day after day with his fellow team members and the universal characteristics of sport such as commitment and freedom.”

“The two players raising their arms symbolize the team right now of euphoria and the excitement of triumph,”

“The sphere at the top is moulded with a relief mirroring the images of continents. This likewise symbolizes football and the world and the lines appearing between the two reflected players expressed the energy of the beautiful game. The lines spring out from the base, ascending in spirals, extending out to receive the world.”

Not at all like the Jules Rimet Cup, the new trophy was made of 5kg of 18-carat gold. The trophy stands 36.8cm tall and weighs 6.142kg. The base is 13cm in width with two layers of malachite, coordinating the shade of a football field. The cup delineates two human figures holding up the Earth, crowning the trophy.

Every lip wants to discuss the euphoric success of their national teams or the excruciating pain of losing out that is mutually shared over the world. The chance to discuss the result of the World Cup matches is a form of treatment for some,  and now it’s here.

The FIFA World Cup™ Trophy is out for public view in Nigeria this week, every nation is permitted to dream about the chance of lifting the prestigious Cup come July. But first, every country should get their team in the best shape to stand a chance of making those dream to work out as expected in light of the fact that, with the World Cup, every nation is allowed to dream