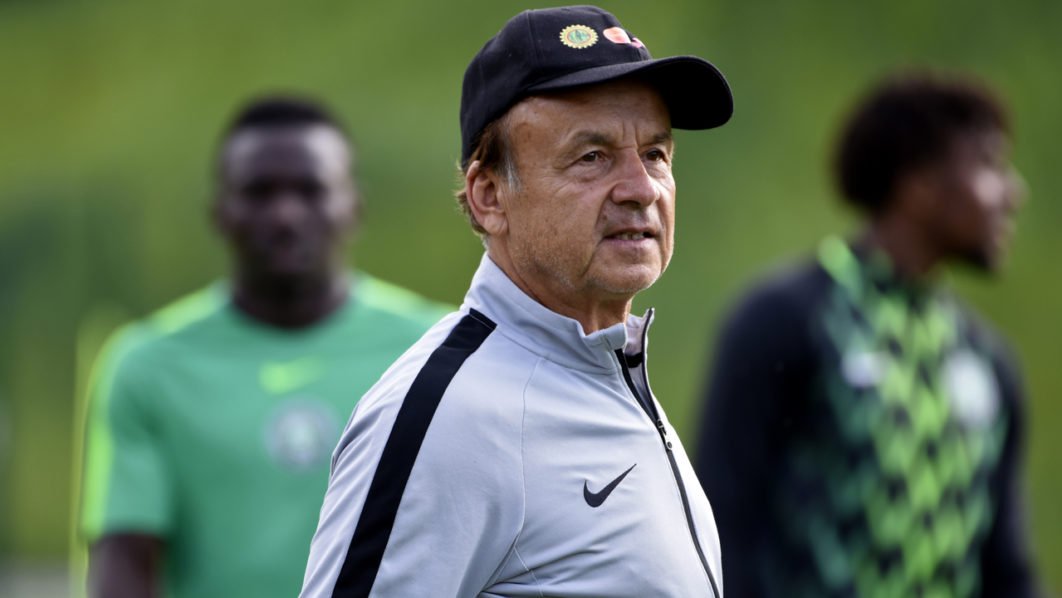 Super Eagles coach Gernot Rohr has stated that the decision on the two players to drop from the 25 -man AFCON provisional list is a difficult decision to make.

The German tactician drops Iheanacho and Semi Ajayi from AFCON squad, while the rest of the squad will fly to Egypt today.

He made this known to newsmen at the Stephen Keshi Stadium in Asaba after Nigeria‘s 0-0 with Zimbabwe in an international friendly on Saturday and explained that all players who made the provisional list deserve to be at the African Cup of Nation‘s which starts on June the 21st in Egypt.

He said the players should not be judged based on a single match considering the wet weather experienced during the game against the southern African opponents and that the decision on who to drop will be made using players cummulative performances at their Clubsides during the season as well as their fitness level.

“We have seven strikers, all seven deserve to play, we started with 3 good strikers, we have Chukwueze, Kalu, Henry, Oshimen, Paul and Simon, the choice of whom to do drop is really difficult for me“, Rhor explained

Speaking on the game, he emphasized that match was used to re-intergrate captain John Obi Mikel who has been away from the National team back into the team, as well as focusing on achieving complexity and not to concede against the Cosafa cup semi finalists, despite the absence of the first team starters.

Meanwhile, Captain of the Super Eagles, John Mikel Obi believes the team includes a good blend of young and experience which would do great things at the nation’s cup saying that the bulk of experienced veterans in the team and the coaching crew would guide young stars like Victor Oshimen, Chukwueze, and Samuel Kalu.

Mikel stated that he is ready to give one hundred and ten percent anytime he comes into the national team and praised the team’s effort to qualify for the nation’s cup explaining that he would add his experience to the team.

Coach of the Zimbabwe National team Sunday Chidzambwa eulogized the Super Eagles for their defensive display in the game stating that the young players in the Nigerian squad have all it takes to qualify from what he terms as an easy group for Nigeria in the AFCON.

He further expressed his satisfaction on the display of the warriors of Zimbabwe stating that although they failed to take the few chances that they created his team had learned a lot from the friendly game ahead of the AFCON.